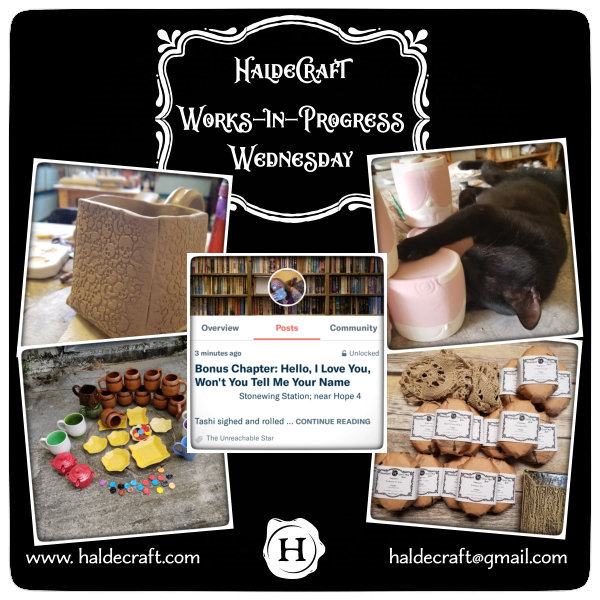 Yesterday a project (setting up a new tortoise enclosure for the boys, who have outgrown their terrarium) that I thought would take two hours took eight, and I have a dentist appointment tomorrow and have to take That Poor Man to get his wisdom teeth out Friday, so my feeling of accomplishment is less this week than I’d like it to be. But I do have some things in the works!

Ceramics are where most of my creative energies are focused this week. Doing more slab/handbuilding, and firing it as soon as it dries, glazing, planning, getting some new things together…. I think y’all are going to love the upcoming work I’ll be releasing towards the end of the month!

In soap, not a lot this week – I have a small update, and I have a small list of other sold out soaps to restock, but I have to wait until I can get the stuff off the work surface I use for that, first.

In yarn, also not a lot – I have a lot of yarn to be rewound, and pretty soon I need to dye the pre-orders for the Cats & Dogs HaldeCrate, but honestly I’m having so much fun with ceramics that my hands are usually too covered in clay or glaze to want to risk touching the yarn, hahah!

In Patreon, I’ve wrapped up a major arc, in the first year of writing. That’s 11 chapters – I think 16 if you also count the bonus chapters – so at roughly 6000 words/chapter (and some more than that) … almost 100,000 words. Technically that’s two full novels, y’all! Anything over 40,000 is considered “novel length”. Whoa. It did NOT seem like that much when I was doing it. Hey! Here’s to the next year!

OK; that’s it for this morning. I’m itching to get over into the studio. What about y’all? What are you working on today, this week, this month? And does anyone want to take my place and go to the dentist for me tomorrow? Asking for a friend (me) who doesn’t like going to the dentist….. 😉