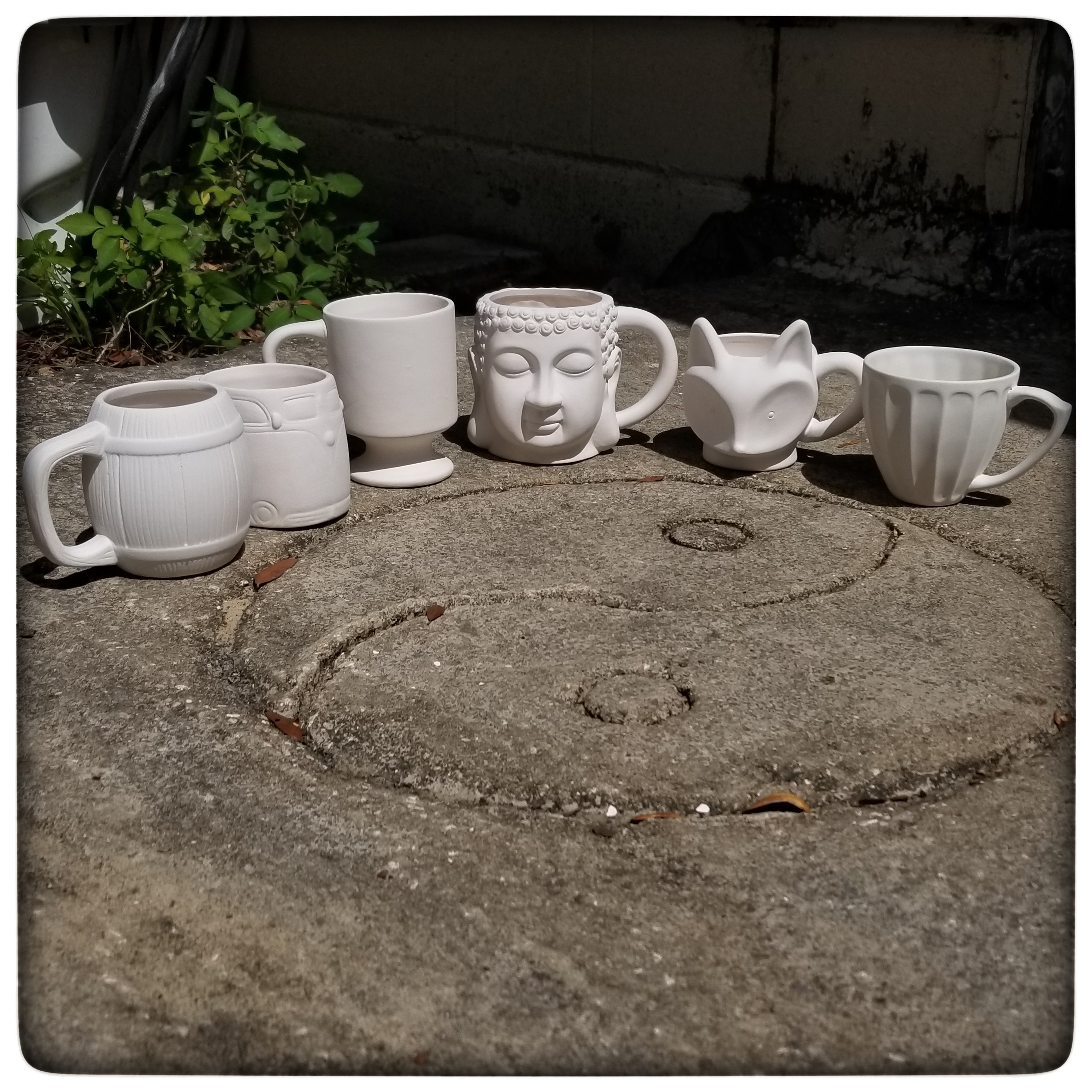 Hey, y’all! Let’s talk about the Mug of the Month! Brief recap: I used to throw or handbuild the mug of the month, showing off the process of throwing and adorning and glazing and whatnot, and… the mugs, frankly, didn’t sell as well as I’d like. Then I got busy but still wanted to do it, so I switched to slipcast mugs, which are faster but more boring as far as the process goes. And those, for the most part, have been selling great! So much so that I put a bunch of work to the side to bring some of them in as regular items, but then I started feeling guilty about the other work I wasn’t getting done, so I started doing pre-orders; the excitement (or lack of) helped me to judge how many I should make, so that I didn’t make three of something that twenty people wanted, or twenty of something that only three people wanted. That’s been a mixed bag… I’m not sure if the pre-orders are getting missed in the shuffle of everything else going on, or if because I’m so last-minute with finishing them, that people can’t get a good handle of what they’re going to look like before I’m done (and sometimes I’m done, like, the day before they’re supposed to go on sale).

So I decided to do something a little different for the second half of 2019 (whoa, y’all, I almost just wrote 2017, what the heck?! Time warp!). Above is a picture of the July-December mugs, in the order they’ll be released, and below are individual close-up pictures. I’m not going to talk about how tall each one is or how many ounces it holds — I’ll get into those details closer to when each one is released.

Now. My PLAN is to have all of these glazed and finished by the end of June (June’s mug is the llama/alpaca, and preorders are already sold out on that one – I’ll have two left for general sale on Monday, June 3rd, barring any horrific kiln accidents). That way, not only can I show them off like this, unglazed, as a reminder of what they’ll look like, but I can also show off pictures of the finished mugs well before their release date. Hopefully that will help you decide if you want to do a preorder or not!

How do the pre-orders work? I list a limited number (usually about half of what I plan to make – so if I’m going to make 6 total, I’ll list 3). If the pre-orders sell out within 24 hours, I’ll list the rest that I planned to make but then also double the amount I plan to make – so let’s say I list 3, they sell out within minutes, I list three more… then instead of only making 6 of the mug, I’ll make 12. That way I know that people are really interested in it, so I make more to satisfy the (hopeful) demand, and you feel less pressure if you missed out on or couldn’t get the pre-order because you know there will be more than a couple available. I hope all that makes sense! I don’t want to short people if there’s a demand for a mug, but I also don’t want to be left with a bunch of mugs that aren’t selling – so hopefully this is fair all around.

Although I have noticed a slight crimp I didn’t think about on my end, which is that in buying so many supplies so far in advance, I have money tied up in product that’s just going to be sitting on my shelves, unsold, for a few months, meaning (a) I don’t have that money for other things and (b) that’s a lot of shelf space that for some reason didn’t occur to me. I’m also now a little behind on other things I wanted to be doing now, because of taking the time to do this (I don’t know why time didn’t occur to me? Do I think I don’t need sleep????) So I may have to do something a little different in 2020, if I continue the Mug of the Month. Which I’d like to do – I love doing limited runs of things because it gives me the fun of making things or practicing a technique and you get something special!

To sum up (AKA the TL;DR) — here’s a peek at the mugs for the second half of 2019. I should be done glazing all of them soon which means I’ll be able to show them off in finished form in a more timely manner. Current schedule of pre-orders (available for one week starting the week the previous month’s mug is released for general sale) and general sales (first Monday of the month) will continue as-is for the rest of 2019. What will 2020 bring? Not sure! Isn’t that exciting?!?

If you have any questions, please don’t hesitate to ask them here or to drop me a line. Sometimes I think I’m explaining something that’s been in my head for a while very clearly, when in fact I’ve left out, like, a whole three sentences full of super-important information. So don’t be afraid to poke me and ask “er?”!