It's Wednesday, and normally I'd ask what y'all ar

An important part of the Day of the Dead celebrati 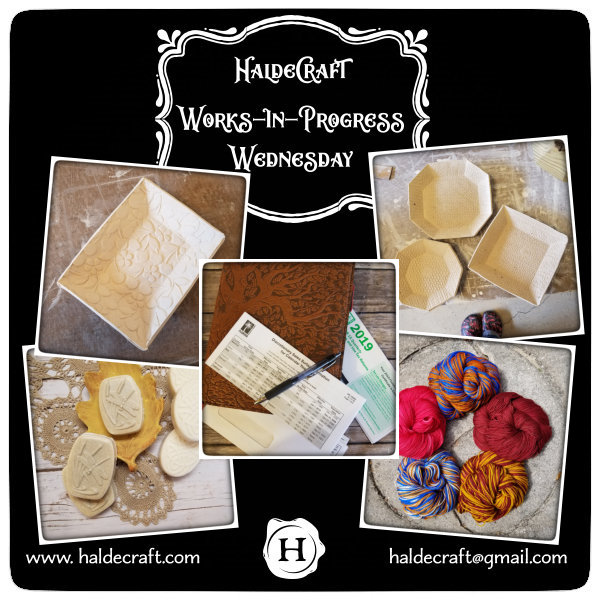 Hey, all! It’s been a few weeks! We had a great trip up to Indiana, via West Virginia, and back down through Kentucky. We visited many art galleries (oh, Tamarack, I love you so!) and drove though a lot of pretty places, and saw a lot of good people. And that’s not even counting time spent with family! But we’re back now, and I’m trying to get back into the swing of working, at least as much as the Shop Cats will let me (they were very perturbed that I wasn’t there to pet them and lavish attention on them for hours a day… Troublesome has hardly let me out of his sight since I got back).

So… what am I up to? What’s going on in the studio?

In ceramics, I’m doing a lot of slabroll work this week, making the soap dishes for the HaldeCrates and some other small dishes for a show I’m doing (hopefully doing) at the end of the month. I’m also trying to get at least one of all of the rest of the year’s Mugs of the Month painted, so that y’all can get a better idea of what I see in my head when I’m talking about them. I’ve just been so close to the wire on them – especially with the unicorn ones – it’s been hard to get ahead.

In soap… well, y’all read my post about that. I’m still fussed. But I have enough base right now to make a lot of restocks, so I’m making a list of what needs to be made, and still looking at alternates.

In yarn, not a lot going on right now. I have some retiring colorways on sale, to move them out and make room for other colorways I want to bring in, and I need to start dyeing up the Cherry Bomb colorway pre-orders pretty soon.

In Patreon, I just put both a bonus chapter (end of March) and a regular chapter (beginning of April) up, and so now for the rest of this month it’s just regular Patron posts over there until the next chapter goes up the first weekend of May.

Oh – I got some good knitting done on the drive. I ripped out a pair of socks and started over, a complicated cable pattern, and I got to the heel turn on both socks in that pair. And I got almost the entire feet done on another pair.

That’s about it for me right now… That Poor Man had to turn around and travel for work almost as soon as we got back, and unfortunately he’d picked up a bug while we were in Indiana. I thought I’d escaped it, but I woke up Monday feeling punky, and Tuesday was worse. Let’s all hope that my one-two punching of it with DayQuil and NyQuil means that I’m kicking it’s butt, because I need to travel this weekend and I’d rather not be a hacking coughing mess for it.