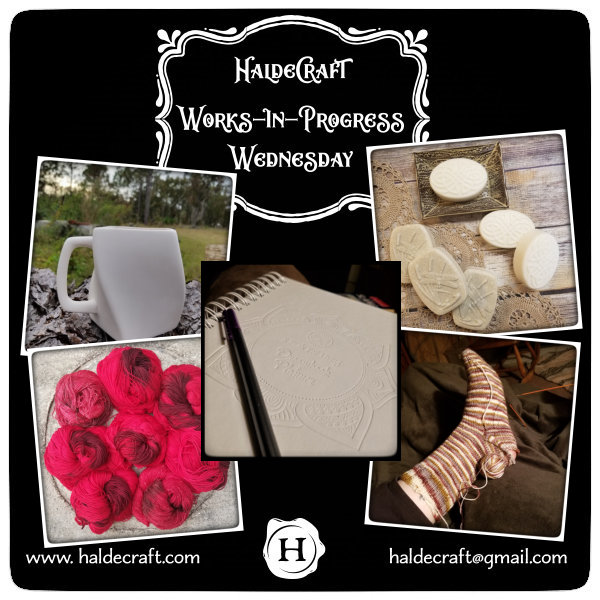 What’s going on for y’all this week? How’s your week shaping up? The time change is hitting all of us… just about every person I’ve talked to this week has mentioned not having enough sleep, enough coffee, enough motivation. We’re all feeling it!

In ceramics this week, I’m working on painting the April mug, and trying to get some restocks glazed. We’re going away for a family event the last week of the month, and I’d like to get everything I need for the beginning of next month squared away before then! I’m also working on planning out the second half of the year as far as the Mug of the Month goes. I made some changes in January but I think I need to make more, so stay tuned for that — I won’t be talking about it until after we get back from Indiana.

In soap this week, I mailed out the March Soap of the Month. That was the good thing about soap this week. Is there a bad thing? You know there is, nobody starts off with “hey that was the good news” if there’s not also bad news. I found out that my soap distributor has almost doubled the price of the goat’s milk base I use for my soap. I’ve reached out to them, since they also just changed website designs, in the hopes that maybe it was a typo… but I haven’t heard anything back. If you’re feeling fear about this right now, trust me, so am I! I use my soap, too! And as much as I’ve sometimes thought it would be a time-saver for me to not make soap any more… not making soap is not an option. I love fragrance, I love my soap, I love that so many of you with skin issues tell me how much you love my soap. So fear not… HaldeCraft is not about to become a No Soap zone. I’ll be waiting to hear back from them, but meanwhile I’m comparing ingredients and prices across a few more places, and trying to think of alternate scenarios that still involve me making soap. However, I may have to raise my prices, and that makes me sad. I’ve swallowed the last couple of price increases because I didn’t want to pass that on to y’all, but I may have to raise my soap up another quarter, soon, to $6/even. But if that means I can keep making soap…..?

In yarn, I have a lot to wind this week! I’m showing off Cherry Bomb in color, and next week I’ll reveal what the new regular colorway (a former club colorway) will be. I’m also looking at some colorways that haven’t sold well – I made a list of everything I’ve dyed, ever, and when I’ve dyed it, and there are three colorways I haven’t had to restock in over a year. I’ll probably put them all on sale at once (making an ad for it on Ravelry)… but again, that can’t happen until after we get back from Indiana. So, early to mid-April?

In knitting, I have a pair of socks I need to weave in the ends on, a pair of socks that I’m about to get past the heel on, and at the Spring Fiber Fling last weekend I got quite a few rows knitted on my poncho! Since it increases by four stitches every two rows, it takes longer and longer to finish a row. I’m also using up the yarn faster than I thought, so there will probably be more color repeats than I was originally intending. I should take a picture of that later today, and show it off!

That’s about it for me right now. I could talk about my writing on Patreon, and I could tell you about some blog post topics I have that I need to write…. or I could just stop talking about writing and go write, haha. So. That’s me. How about y’all? How’s your week? What are you working on? Not working on? Goofing off with? Planning? Tell me about yourself!