Successful small firing, #2! If you missed it yest

Too Much Quarantini, the entrelac edition. Getting

And with a solid color, we have success. So! Here' 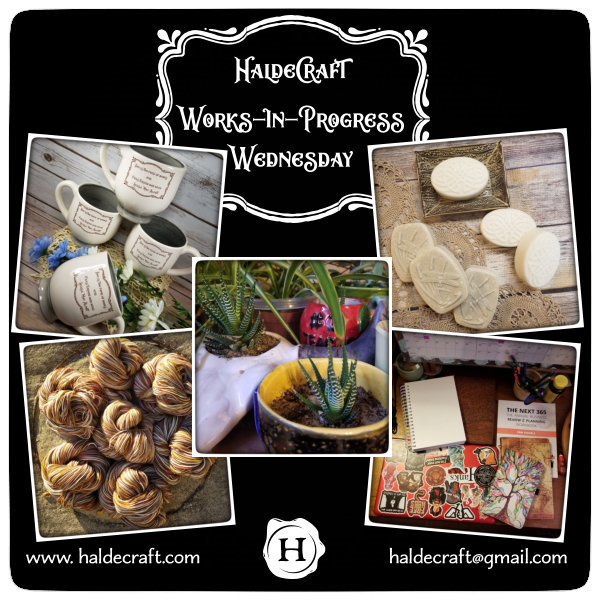 Whoops! I was all set to write this yesterday morning as usual, but then got a call from my doctor’s office that they could see me right away, so I dropped everything and rushed in so I could complain about how everything OTC I was taking wasn’t helping, do I have bronchitis again….? And guess what, y’all! I have bronchitis again! With a side dish of sinus infection! Yaaaaaaaaaaaaaaaay! A two-fer! At least it’s not like that time I had bronchitis and pneumonia at the same time… I really wanted to throw myself under a bus then. ANYWAY. Yesterday’s graphic!

In ceramics this week, I’ve had a good kiln firing and more things will be coming into the shop next week – it wasn’t a big firing but I needed some things in there to make new ads for Ravelry, so expect to (finally) see ceramic owls for the HaldeCrate next week (although I did post pictures of them on Ravelry this morning, so if you’re in the HaldeCraft group there…? And I’ll take better pictures when it stops raining, and get those up on the product listing pages today or tomorrow). Let’s see… what else? The February mug is all done, and ready to go up for sale on February 4th (and that week I’ll open up pre-orders for the March mug, the unicorn – I’ll only have 6 available for pre-order and will only be making 12, just FYI).

In soap, I have some more to wrap, both Goat’s Milk and Oatmeal, and I’ll be listing those as as soon as I get them all wrapped up. Then I need to make another list of things to be restocked, but I have to take a little break from making soap to focus on yarn.

In yarn, I’m dying up some Nagata but unfortunately not as much as I thought — I thought I had about double the amount of blanks than I actually do, so only about half the colors will be represented. As soon as I can place another order with that distributor, though, I’ll get more in. There will also be some other restocks coming late this week or early next; mostly Tepper but also some Andre and Lynn.

In other things… well, I mentioned the February HaldeCrate, above… I’m working on the idea for the May HaldeCrate – I have a bubble of an idea based on a colorway I’ve wanted to do since the beginning but just never got around to. I’ll make a more official announcement after the February Crate goes up for general sale in a couple of weeks!

That’s about it for me right now, I think. As usual, I’m sure there were other things I planned on saying when I sat down, but they’ve gone out of my head. What about y’all? What are you working on this week? What are you thinking about, focusing on, doing?