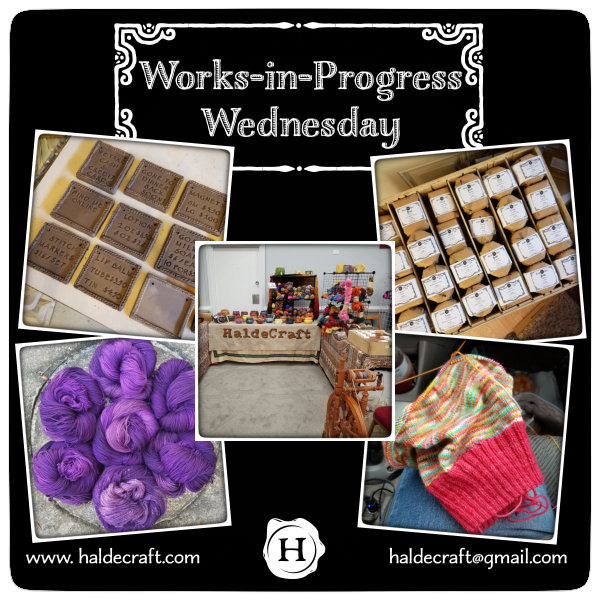 I just posted over on Facebook that this is the most Mondayest-feeling Wednesday ever. Whooo, boy? Just me? Anyone else not feel at all like it’s Wednesday? How can the week be half-over already?

In ceramics, I’ve reached a good pre-Fiber-In stopping point with the mad rush of glazing, and now I’m in a mad rush of firings. Yesterday I fired Little Geek; the day before, Big Geek; the day before that, Little Geek. Unfortunately, Little Geek has been throwing me an error code with my mid-range fires, so that’s going to take a little fiddling. (Pottery nerd alert: I’m getting an FTL error, which means “Firing Too Long”… unfortunately, that can mean EITHER firing too long, or cooling too fast once off. Same error code. No real way to tell which other than to sit by your kiln with a timer for 16 hours or so. Awesome.)

I mentioned being on the fence, a few weeks ago, about continuing with the Mug of the Month or moving on to bowls/platters/whatnot… I think I’m going to stick with mugs. I just love mugs, so…. I’m glad I entertained the thought of change, but upon weighing everything, I don’t really feel the need to. Hooray, mugs! Speaking of mugs, a lot of people have left requests for notifications about new dragon mugs – I will go ahead and make some more of those, but not until after Fiber-In. So expect those in early October. Do you think that’s one I should bring into regular rotation….?

In soap, not much is going on this week. I’ve got all the Fiber-In soap ready, although I do need to pull the yarn and knitting needle soap offline and decide how I’m going to display them. I’m also struggling with trying to revamp a scent – Marie’s Hearth. It’s actually inspired by her favorite perfume, and I recently found a bottle of it and am trying to rework the scent I make to be a little more like that. It’s close, but not quite… I need a little something sweet, but not too sweet, and I can’t figure out what it is. So I think I’m out of that fragrance right now – it’ll be back in when I get this remix correct!

In knitting, not a lot is going on. I’m at that stage in a Sockhead hat where I feel I’ll never finish. I’m knitting it for a friend losing her hair to chemo, and I’m making it a big honkin’ hat so that when her luxurious big hair grows back, she’ll have a place to keep it. Next up is either a Viking Chicken Hat or a Princess Leia wig for another friend who is done with chemo but needs radiation… I’ve already knit him three or four hats, but… you can never have too many hats. Especially if they’re nutso.

In HaldeCrate, I just pulled the tester of the Day of the Dead mug and ornament out of the kiln and y’all. Y’ALL. I have shown it off on Ravelry and I’ll post it everywhere else next week. I am grinning just thinking about it! And I’m weighing doing a December Crate or not. I was planning on it – I even have a great idea (“Appy Owlidays”, a holiday owl theme)…. but December is usually my busiest month, so, do I really want to add to that? What if I did a very, very limited number? Appy Owlidays isn’t a theme that’s going to work year-round, you know. So maybe I should do it. But there are only so many hours in the day and will I have enough to do my best? DECISIONS. This is what it’s like being the boss. You have to make decisions.

In other things… stay tuned for an announcement on or around October 7th. I bet you could get the announcement out of me early if you promised to keep it a secret and we met for beers or coffee, but mostly I’m keeping this project quiet until I get a little farther along in it. NO I AM NOT PREGNANT. Good lord. That would be horrifying. One kidney, and 48 years old? I wouldn’t wish that on anyone. (I am also not sick, or anything horrible, pinky swear. It’s just a new work-type-thing I’ve had on the back burner for a while and am finally giving it the attention it needs to come to the front… it just needs a little more time to cook, first.)

OK! That’s it for me this week. What about y’all? What are you working on? What are you proud of being almost done with? What is stressing you out because you feel you’ll never finish? Talk to me!