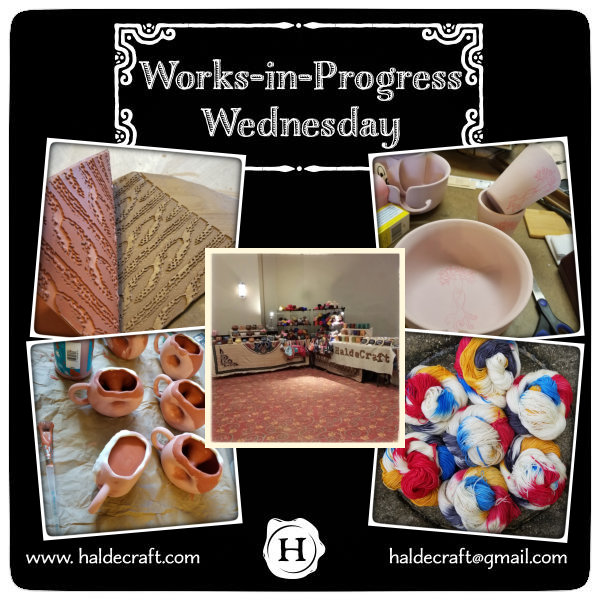 Wasn’t it JUST Wednesday? This week is flying by! What are y’all up to?

In ceramics, I’m having a lot of fun glazing and also working on some slab-rolled things. One of the cats knocked over my favorite soap dish photo prop, so I’m making a new one. In making it, using a new texture mat I got earlier this year, I realized that this would be the perfect thing to bring to the Florida Fiber-In… so I’m also making some extras. I’m also working on a series of Goddess mugs, that will somewhat match my yarn bowls. Is that the kind of thing you’d like me to make on the regular? I was thinking of a one-time offering, but I’m open to making them a regular item (I’ve already seen them out of the kiln, and love them, which is why I’m saying that). Let’s see… what else? The September mug is on track to be released next Monday… and I’ve already got my eye on the October mug… is that it for ceramics this week? I think so… Oh – a lot of people have left their emails to be notified if I make more of those dragon mugs, so… I think I’m going to make more of those dragon mugs. Is that a mug you’d like to see me stock all the time? Or should I just make one more run of them?

In soap, I’ve just made a lot to bring with me to the Florida Fiber-In. I’m doing it a little differently this year; previously, I’ve only brought the soap that has the yarn and knitting needle design on it. I’m going to be phasing that design out, so I’ll be taking them off the website right before Fiber-In and bringing what I have with me, which I’ll put on sale that weekend at the event. If any make it home with me, I’ll relist them at the sale price until they’re gone. I’ll also be bringing with me a selection of full-sized bars, in many fragrances (some of them extra bars left over from things I’ve made this year for the soap subscription service, and some of them are new fragrances I’ll be releasing later this year).

In yarn, I’ve dyed up a new colorway – well, an old club colorway that people voted on last year to be brought back in as a regular one. I’ll be debuting that at Fiber-In, and releasing it on the website after that. I’ve also got the test dyes done for the Day of the Dead yarn for the next HaldeCrate (although I would have liked that blue to be a little darker). And I’m trying to dye restocks of sold out things, but keep getting sidetracked.

In other things, I have a behind-the-scenes not-really-HaldeCraft-but-kinda thing going on, that I’ll talk about in a month or two. It’s something I’m pretty excited about but can’t really talk about yet, so, you know, here’s a hint that something really neat is happening but neener-neener, I can’t tell you. Good lord, but I am *terrible* with secrets. Let’s see… what else? That Poor Man’s aunt and uncle, who live on our property, have needed my car this week as theirs is in the shop. So I’ve been car-less during the day… or as I prefer to think about it, car-FREE. It means I have to schedule pickups for packages, but it also means I can’t distract myself by going and running needless errands (do I really need MORE Bai waters from CVS? I already have five in the fridge! But they’re different flavors!).

Well, I think that’s about it for me this week. What about y’all? What are you working on? What’s filling your day? Anything exciting? Anything boring? Got any good secrets? Let me know!