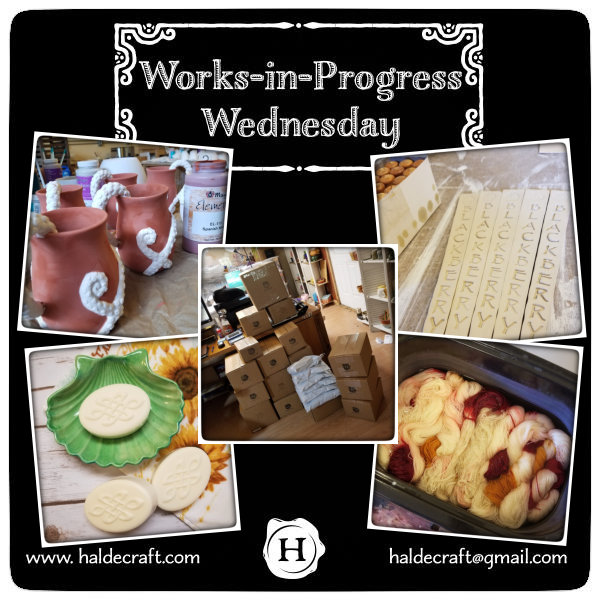 Whew. I’m getting my feet back underneath me from last week… but I’m also eyeing the calendar suspiciously because… Winter is Coming. In the retail life, it’s never too early to think about the winter holidays (having said that, you won’t hear any overt Christmas talk from me because we haven’t even had Halloween yet!). Anyway. What are y’all working on this week?

In ceramics, I have a huge list of slipcasting to do (african violet pots, the sewing machine planter, baby head mugs)… I have a list of bisque to paint (mermaid mugs, tentacle mugs, goddess yarn bowls)… I have a small list of slabrolling to do (a few soap dishes, some signs I want to make for craft shows, and many many magnets to be restocked).

In soap, I’m getting ready to start stocking up for Fiber-In in September. And I have to have a … coming to terms with something. Y’all know the soap I make in the shape of the yarn with the crossed pair of knitting needles….? My molds are getting to be in bad shape. They’re warping a bit, and many of the cavities can no longer be filled to the top because of it. I went to go buy new ones, and… that mold isn’t made any more. So. I’m facing a crossroads. Do I keep using the molds I have for as long as I can, knowing that the weight on some of the bars may be shorted? Or do I … go ahead and start no longer restocking them when I sell out, and slowly phase out that design? I like that design, and I like having something geared towards my yarnies (even though I’ve always felt bad the company didn’t also make a mold with a crochet hook). But maybe it’s time to say goodbye….? I don’t want to put out a less-than-quality product. Hrm.

In yarn, hooooooooooo boy! I’m going to have some One-Hit Wonders in a bit, thanks to some accidents in the dye pots. I’m torn, though, between putting them up online or holding onto them and bringing them to the Florida Fiber-In. I’m also making a list of what I need to try to restock before Fiber-In (sock blanks, I’m looking at you!). New base yarn Nagata is definitely on the list (note to self: take down the limited edition listing of that and transfer each one to the actual listing for that color!). I’m also getting ready to bring in a club colorway from a few years ago that people on Ravelry voted to be brought in as a regular… I’m hoping to debut that at Fiber-In.

In HaldeCrate, I’m still fiddling around with paint colors for the mug and the ornament, but I have settled on the yarn color (which will match the mug and the ornament, it’s just that I need to get the application done in a way that won’t either bleed or smear). I’m contemplating going ahead and doing the soap/lotion/lip balm first this time, since I have a lot of soap to make over the next week. I usually save that for last but with travelling for two different weekends between now and when the Crate is released, I feel like I should strike while the iron is hot and go ahead and knock those out. And I’m already thinking about December. Do I want to even do one in December when I’m usually really swamped? Or do I want to do one because I have an idea that would make a really need bundled gift?

In other things… there’s the usual background work going on (website work, data entry into my inventory/accounting system, weighing value of stock not moving vs time and work put into it) and the usual background life going on (taking family to doctors appointments, family birthday dinners, putting the House Girls on the most expensive cat food imaginable because Moya decided to be like her mama and get food allergies). What about y’all? What are you up to this week? What are you working on? What’s getting crossed off (or not crossed off) your to-do list?