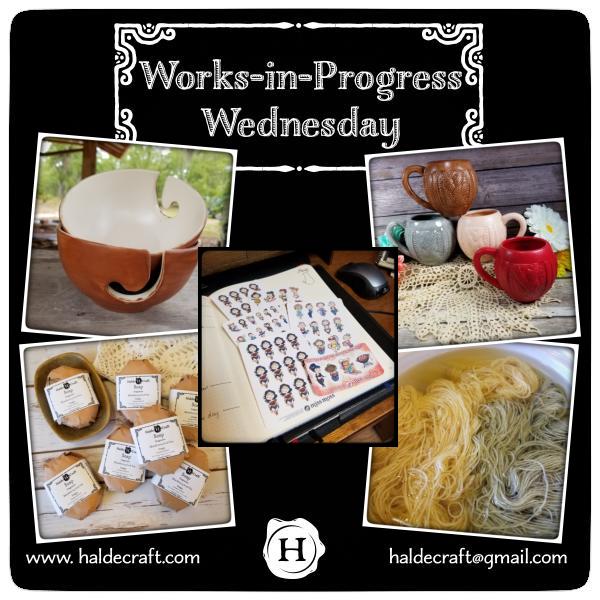 I almost skipped writing this post this week, but I skipped last week, so… here we go! What *am* I working on? And what was I doing last week that I was too busy to write? Last week had a holiday, friends in town, a tattoo appointment that took longer than I thought it would, and then an almost-all-day business meeting — I think I worked less days last week than I didn’t. But I got a new tattoo, and I got to spend time with friends who moved away earlier this year, and I went to a movie, and got some paperwork-things ironed out. So it was a fun week, if not overly work-productive. And now, this week….!

In ceramics, I’m working on yarn bowls and tiki mugs for the June HaldeCrate. So much cuteness! Also it’s making me crave fruity rum drinks. And if you’d asked me a week ago, I would have said that I’m starting to run low on things to put up for sale on “This Week Only”… but then I decided to go ahead and just cancel my Etsy shop instead of letting it limp along and only be active at Christmas… so expect to see some things that had disappeared to my Etsy shop make a brief return as sale items. Of course, some things that *had* been sale items here had drifted over there, so I’m not really sure what to do with those things. Have them meet Mr. Hammer….?

In soap, I don’t have much going on. I’m making a few more bars of Coconut Cream soap, so that I’ll have many extras of the soap set for the Crate come June 15th. The Monkey Fart soap set sold out immediately, so I’m making a few more Coconut Creams than I did for Monkey Farts. I did have a request from some of the Year of Soap members about a fragrance I sent them, to bring it in full time, and also a request for one of the Limited Edition soaps… so there might be a couple of new fragrances in the Fall.

In yarn, I’m dying up those tweed sock weight skeins, and also some extra worsted weight skeins I had leftover from yarn club. Right now all four of those bases will be limited to what I do, but your input will determine if any (or all) of them become regulars in the shop! I’ll have more on this probably next week, if not later this week. Also, I’m dyeing up the last of the Coconut Cream yarn. Smartly I didn’t wait until the last minute for everything this time, so there’s not too much to do. I’m actually kind of feeling on top of things! (Don’t tell the universe I said that, something always happens when I feel on top of things…..!)

In other things… so many things. All the things! So many I kind of don’t even know where to start, and I was already feeling pressed for time before I wrote this, and it got rather long, so… let’s just say I’m busy. But happy!

How about y’all? What are you up to this week? How’s your week shaping up?