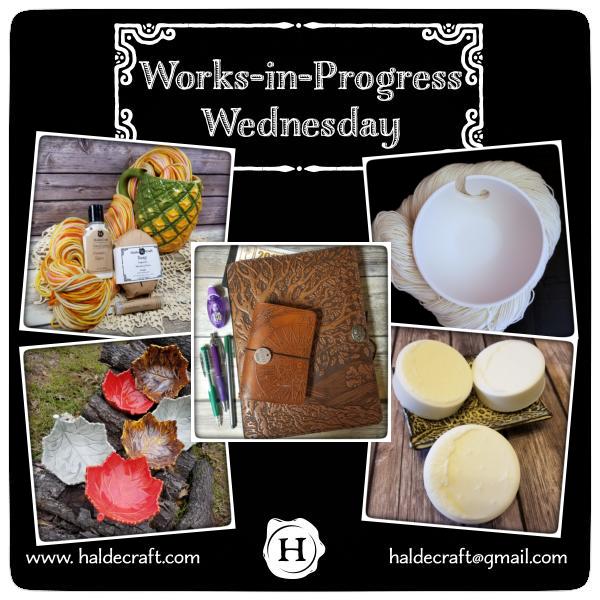 I am so not in the mood to write a WiP blog post right now*, but if I don’t, it’ll never get done today, so here we go.

Who is the brainiac who decided that quarterly sales taxes are due the same week as yearly income tax? Because that’s pretty… taxing, y’all. On my brain, not just my pocket book. So there’s a lot of … desk and papework time that’s happened in the last two weeks (I was so busy last week that I skipped writing a post).

In ceramics, the last two weeks, I’ve been painting pineapple mugs like a… well, like a pineapple mug painting fiend. Note to self: next HaldeCrate, don’t wait until pre-orders are closed before starting to make things. Make things all along! Trust me on this, Future Self.

I also have a few other things I’ve caught up on, taken pictures of, written descriptions for… and gotten restocked. All those things will be hitting the shelves over the next couple of weeks. And yes, blue mermaid mugs and all tentacle mugs will be restocked as fast as I can glaze them!

In soap, I haven’t had time to do anything other than finish wrapping the soap for the Monkey Farts set… but I’m getting ready to mail out April soap for the subscription service this week, and in two weeks I’ll list the April limited edition soap. Or you know what….? Maybe I’ll list it early, next week, just to get it out of the way. I was shooting for the last Monday of the month, but I’ve already got it made, I just need to wrap it. Maybe I should list it when I wrap it just so I don’t forget about it, heh.

Oh, and I’m working on a major restock list, including both the herbal and earthy guest soap sets.

In yarn, I’m working on taking pictures and rewriting all the listings. I was going to re-photograph and re-write as I restocked, but that’s just not happening, I keep pushing that off to the side. So I’m just going to unpack everything, take new photographs of everything I have, and add in the rest as I restock. I need to get those new listings written… it bothers me to have some in the new format and some in the old.

In other things…. are there other things? I feel like everything is Monkey Farts right now… except for the Coconut Cream stuff that I accidentally already made. Y’all, that lotion! I’m in love with it, and I promise not to go on and on about how great is smells, since the rest of you can’t get it until June. Although maybe me going on and on about it might make you want some more….?

I’m also writing out a two-page Brain Dump in my Bullet Journal of things that I’ve half-started and need to finish. Y’all. THE LIST. It scares me. I need an administrative assistant! And a minion or three! Or less ideas, hahahaha. Anyway. Sigh.

So, that’s me this week. What about y’all? What are you working on?

* I just had a long phone conversation with someone at the Jacksonville post office, who told me that – in spite of me shipping out of the Lake Geneva post office for the last three years – I’m not supposed to, because it’s a different zip code than my house.

What the actual what, y’all. Does the United States Postal Service not want my business? Because they’re real friendly at the UPS office.