Time flies when you’re fixing one thing after another – or when you’re interrupted when fixing one thing in order to hurriedly fix another… As I’m writing this, Tim is in the guest bathroom fixing the tub faucet (the first time he turned it on, before I even got here, it shot out water across the tub and wouldn’t turn off). He’s had to go to the store five or six times to get the right parts, and since it wasn’t the only bathroom it became less and less of a priority as things that were priorities reared their ugly heads and spat at us.

There was the whole no-phone/no-TV/no-Internet thing in the beginning… I can live without the TV and the phone, but when you run a business online, not having Internet makes it kind of hard to run your business. I was petrified that I had just shot HaldeCraft in the foot; that I was going to go out of business while moving to the place that was supposed to save and improve my business. I also flashed back to when I was 15, and my parents first bought Tree Frog Farm. It was summer, so they would get up in the morning and go to work… I was 15, didn’t have a car, so would be stuck out there all day. We had TV with an antenna, so I could get PBS and ABC from Gainesville, but that was it. We didn’t have a phone right off (and it’s not like I had so many friends in town anyway, that I could just call) and that was way, way before Internet. I was stuck out there, and for the first week out here, with almost the same scenario (Tim was taking my car to work that first week, as the truck was in the shop, so that he could fill up the RAV with things at the house and bring them out here). So from the time he left in the morning to when he got back from work, it was just me talking to the dogs. And texting my best friend that I had monumentally fucked up my life and that buying this place was the worst decision I’d ever made in my life (don’t worry, she talked me off the ledge).

Some of you already know this story, if you’ve been following me on Facebook, but we were supposed to go with a company that bundled everything into one bill; they would provide all three things. Except when the first technician came out here, he couldn’t install their magic box. Our house is 500 feet away from the edge of the property, where they’d have to put their magic box, and that pole is about another 350 feet away from the next magic box up the road… apparently the magic boxes only talk to each other wirelessly, and they only reach about 250 feet. So we’re 850 feet past where they stop service. The technician didn’t really tell me all of that, though… well, not the FIRST technician. He said he was going to have to put in a work order for a crew to come out and survey the distance, and make the judgement call about putting in extra boxes. This was… I don’t know, about two weeks before I moved in? We waited and waited, but didn’t hear anything, so I called the company. Oh, they didn’t see any record of that, let’s send out a crew. So they sent me another technician, who was all, “Oh, I’m sorry, you’re about 850 feet past where we stop service. I can’t do anything for you. I can make a recommendation that the company install new poles, and run new magic boxes, but it could be a good six to eight weeks until they make a decision on whether it’s cost-effective for them to do that, and then they’ll be months of getting permits and running things out here.”

Fucked if I was going to wait that long. And then when they sent out a third technician LATER THE SAME DAY, who was all, “hey, I’m here to install a magic box– oh, wait, it looks like you’re about 850 feet past where we stop service!” … well, I knew I had to get out of this company and look somewhere else. Except that the first time I called to cancel my order, they wouldn’t let me do it. Someone’s orders hadn’t gone through, or there was still an open work order, or some such bullshit. I’m not going to name the company but they are notorious for not letting people cancel service, I’m sure you can guess the name. So the last day that I lived in town, I called to cancel, and they wouldn’t let me. That weekend, even though I moved out to the property with no Internet, I wound up having to go back into town to get information I’d left on the computer at the Gainesville house, so while I was there and had Internet, I googled how to get out of service with this company. I read that while they had a script they had to follow (that was obvious) there were a few off-script things they didn’t know how to answer or deal with. You could tell them you had died (obviously you’d be pretending to be someone else on this call). You could tell them you were moving to an area (and the site advised finding a zip code for this) that they didn’t service. You could tell them that you were moving in with someone who already had their service. Or you could tell them, and this is the one I went with, that you were no longer moving to the location where they were going to give you service and would be homeless for a while. That whole conversation is worth repeating, but again, I don’t want to name the company.

While the second technician was there, he mumbled something about how I shouldn’t bother to call Windstream or HughesNet because they wouldn’t be able to help me either. I’d already researched Windstream and knew they didn’t service our area, so I looked into HughesNet… who we now have a very generous, very affordable satellite Internet plan with (and phone with AT&T, who just transferred our service but had to give us a new number) and they gave us a good discount with DirecTV if we started up with them. So now we are all set up, technology-wise! Well, there was the problem this week where even though all of the electronics are covered by various levels of surge-protectors, there was a helluva storm and the lightning came up the cable line, blowing out the DirecTV box (they’ve since sent us another and while we lost everything on the DVR we’re more amused by that than anything else… considering that we still hadn’t caught up with the shows we were taping, and had been watching things on Hulu and Netflix in order to catch up on what we missed when we were living in two locations).

The deck is now finished, and ready for partying. It’s funny (hahahah) how we thought this was one of the things that had to be done FIRST, one of the things that HAD to be finished in order for me to move out here with the dogs. We thought the things that HAD to be done were: fencing in an area for the dogs; building a back deck; building all the shelves and work spaces for HaldeCraft. Hahahahhahaha. Oh, hah. It turned out that being together was the most important part, that he and I and the dogs and the cats all being under the same roof is what became the most important thing – the dogs were getting really antsy, they could tell something was up, and Corwin was starting to act out in aggressive ways that made me worried… so we went ahead and came out here. ANYWAY… got a little sidetracked there. The deck is finished! Tim put the finishing touches on it yesterday. We are beyond pleased! I’ll do a whole post on it some day but until then… 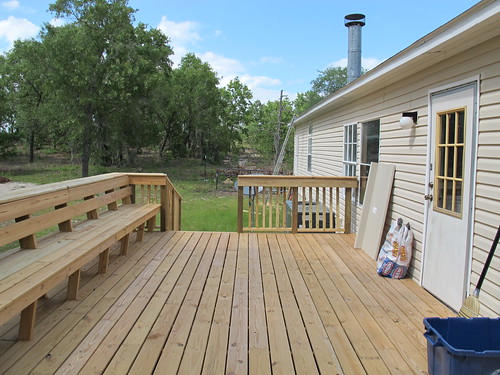 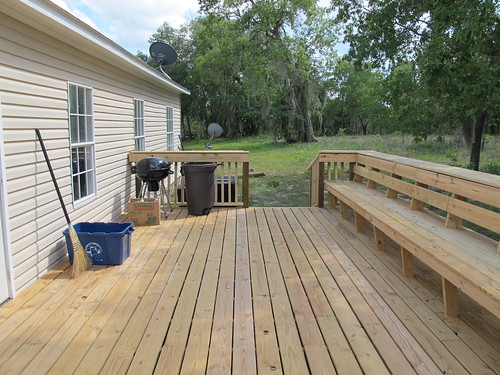 And, even as I’m writing this – wait, I might have mentioned this already – Tim is fixing the plumbing in the guest room. We’re having a housewarming party tomorrow, and it would be awesome if there were working toilets. AND NOW THERE WILL BE. I just heard him flush the toilet in there, and didn’t hear flooding sounds or cursing… so it sounds like everything will be golden for tomorrow. Oh, running working water, I love you so.

There are still a few things that need attention… I mean, besides all the unpacking that needs to be done. The stove has been a fun drama. By “fun” I mean “not fun at all.” The phone has a static to it that drives me insane, and I’m not sure how to fix it. There’s no dishwasher so we’re washing dishes by hand (and I can’t even tell you how that grosses me out… yet even more baggage from my strange childhood) and the water in that sink takes about three minutes to get hot, and never gets what I think is hot enough, or stays hot long enough (Tim is thinking of installing a small solar-powered water heater on that side of the house when he finally has time to install a dishwasher). Shelves and work stations for HaldeCraft still need to be built, and eventually, bookshelves for inside the house, along one wall. And the dog fence still needs to go up – Tim could really use some help by someone other than me for that one (ie someone a little taller and more muscular), so if you’re reading this and have just absolutely been dying to string some fencing in the heat of Florida summer…? And poor Tim hasn’t even had time to think about garden plans, he’s been so busy with other things. But his Uncle Joe did an amazing job on the electric, and the plumbing seems to be – finally – on the upswing, and the deck is done, and we’re all here, and for the most part, we’re laughing. We’re at least smiling. And we’re home.