The end result of playing around instead of workin

This One Hit Wonder in Yolen (https://www.haldecra

Now that Troublesome knows that you "enjoy" pictur

There is not a lot of serenity out there right now

Ermahgerd, what am I going to talk about now that Boob Saga is over?!

Speaking of boobs, I’m so over these mugs — 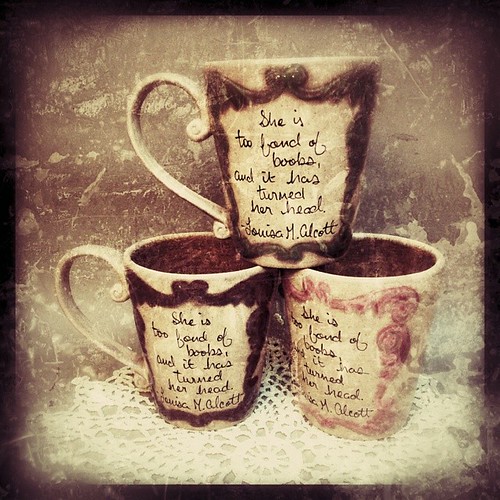 I’ve been trying to do mugs with literary quotes on them forever. OK, not LITERALLY forever, but for about a year. The first batch had odd crazing issues (the glaze crackled when I took them out of the kiln). The second batch didn’t have crazing issues but I used a different glaze and I found them terribly dull. The third batch is above; I used another different glaze, was super happy with how they turned out, and when I showed a photo of them on Facebook, every single person who commented thought that the word “books” was the word “boobs”, because, my handwriting. So I never put these up for sale. Some of my book-and-boob-positive friends will be seeing them for Christmas. SPOILERS.

Now I have one more case of these GD bisque mugs, because a good customer broke the one she bought, and asked me for another, and I really like her so can’t refuse her… but my distributor doesn’t sell them singly, just in cases of eight. So I’m making her, her one, and now I’ll have seven that I’m contemplating setting on fire in a crossroads at midnight.